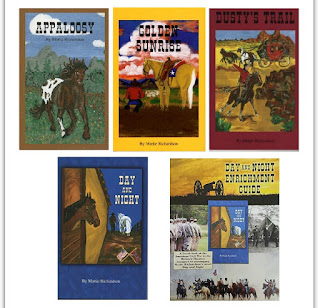 Are you looking for a unique way to learn about American history? Then I would like to invite you to read this review on Author Mattie Richardson/Appaloosy Books from the Mattie Richardson’s Horses in History Series. For this review, I received all four books in this history series – Appaloosy, Dusty’s Trail, Golden Sunrise, and Day and Night; as well as a PDF enrichment guide for the Day and Night book. These horse-centered books are geared specifically towards ages 8-14, but are great for any horse lover in general. Each softcover book tells about a story in American history from the horse’s point of view.


Appaloosy tells the story of the Nez Perce Indian War. Storm is a soft brown, double-colored horse of the Nez Perce tribe. He is given to a young brave names White Feather, and the two move to the reservation. When war breaks out, White Feather covers his face with war paint, and is able to ride Storm sideways, a trick the Nez Perce tribe used so they could bring the bow over the horse’s back. The battle turns Storm’s life upside-down and he is taken away from White Feather. He is sold for $100 to be beaten down and trained to work; but Faith comes to the rescue when he twists his foreleg. Faith paid for Storm with her golden locket and brought him to live on a small farm with her family. But when he is stolen by horse thieves and cattle rustlers, once again his life is turned upside-down; but as fate would have it, he was able to escape and galloped into the night to return to Faith and his mare Savannah. Storm is content to live the rest of his days here on this small farm with Savannah and their foal named Stardust.


Dusty’s Trail tells the story of the Pony Express. When young Levi Anderson reads an ad in a local newspaper, he can hardly resist the urge to saddle up and head out for a new job; but his horse Dusty does not think it is a good idea. Dusty enjoys his quiet life on a small family ranch – chasing cows and sometimes horseracing with the neighbors. He cannot imagine leaving. Levi steals him away in the middle of the night. Dusty rears and bucks, gallops and balks, but remains with Levi for the long run. The more they gallop on the wild runs with the “Pony Mail” the closer they bond as friends. But when Indian trouble arises, endangering the Pony Express Stations and even Levi’s life, Dusty galloped into the cool night air and found his way to a Paiute village. Dusty had saved Levi.


Golden Sunrise tells the story of the Alamo. Jared becomes a volunteer soldier for the emerging fight for independence and Cheyenne, his beautiful Golden Palomino mare, travels with him into San Antonio, Texas. He receives orders to defend Fort Alamo against Mexican forces. Together, Jared and Cheyenne, make it through the war with the words “Remember the Alamo” ringing in their hearts and minds.


Day and Night tells the story of the Civil War. Tucker and Shiloh are two young horses that are brothers but they are as different as day and night. They were separated at the beginning of the Civil War – one with the US Army and the other with a young Confederate soldier; but the two see each other again after learning quite a bit from fighting on opposite sides of the war.


The enrichment guide for the Day and Night book is a great resource to dig deeper into the story and the history within its pages. Reading comprehension questions asks about the text itself and quiz the student on the history they’re learning in the story. Vocabulary quizzes the student on words that might be unfamiliar within the text. The history segment includes a brief reading of a historical topic mentioned in the story along with questions about the historical subject. The living history segment includes a related craft or game to bring history to life. Geography talks about different places related to the text, as well as landscape and other geographical features. For the horse lover, it talks about different horse topics that were discussed in the story. The biography section includes a short reading about a historical figure mentioned in the story. Writing assignments and further reading suggestions are also provided in this enrichment guide.


Mattie Richardson’s Horses in History Series is a unique way to learn about American history, especially from the horse’s point of view. Don’t take my word for it though – make sure to visit the Crew Blog to check out the reviews from the Homeschool Review Crew!

Welcome to My Happy Homeschool! My name is Susan Reed and my heart's desire is to encourage the homeschool mom to live out God's calling and stay the course.