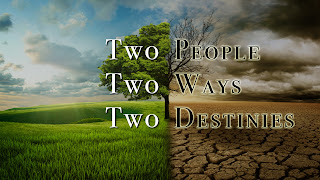 
Psalm 1:1 – Blessed is the man that walketh not in the counsel of the ungodly, nor standeth in the way of sinners, nor sitteth in the seat of the scornful.


The psalmist describes the godly man through three expressions of sin – the man that walketh not in the counsel of the ungodly, his conduct is not shaped by worldly standards; nor standeth in the way of sinners, he does not make his association with the ungodly; nor sitteth in the seat of the scornful, he has no fellowship with the ungodly who scorn God.


Psalm 1:2 – But his delight is in the law of the LORD; and in his law doth he meditate day and night.


Psalm 1:3 – And he shall be like a tree planted by the rivers of water, that bringeth forth his fruit in his season; his leaf also shall not wither; and whatsoever he doeth shall prosper.


The godly man is described as a tree planted by the rivers of water, he is rooted in God’s Word and therefore he bringeth forth his fruit. Scripture tells us he bringeth forth much fruit (John 15:5). God can use you no matter what season of life you are in. It is never too late to begin bearing fruit. The enemy will point to our pain and frustration; but if we abide in Him, we will bring forth the fruit of the spirit – love, joy, peace, longsuffering, gentleness, goodness, faith, meekness, and temperance (Galatians 5:22-23). This verse continues to tells us his leaf also shall not wither; and whatsoever he doeth shall prosper, he will have a godly heritage.


Psalm 1:4 – The ungodly are not so: but are like the chaff which the wind driveth away.


The contrast between the godly man and the ungodly man is striking. The psalmist describes the ungodly man like the chaff. The chaff is husks of grains that are usually separated during threshing because it is worthless matter. The ungodly are dead in their trespasses and sin, they are unserviceable, they are without Christ, therefore they are easily carried away in death.


Psalm 1:5 – Therefore the ungodly shall not stand in the judgement, nor sinners in the congregation of the righteous.


Upon death, the ungodly will be separated from the godly. God will profess unto them, I never knew you: depart from me, ye that work iniquity (Matthew 7:23) because the ungodly cannot be in the congregation of the righteous.

The godly man is in Christ; therefore he will not perish but have everlasting life (John 3:16). Yet the ungodly man will perish because his name is not found written in the book of life and he will be cast into the lake of fire (Revelation 20:15).


The first psalm compares the happiness found in the godly man with the sadness found in the ungodly man. One life leads to everlasting life, the other leads to death. One cannot seriously read this psalm and not examine his own heart. Oh sinner, escape hell, the destiny of the ungodly, and enjoy heaven, the destiny of the godly. Simply believe on the Lord Jesus Christ, and thou shalt be saved (Acts 16:31).

Posted by Susan Reed at 5:54 AM No comments: Welcome to My Happy Homeschool! My name is Susan Reed and my heart's desire is to encourage the homeschool mom to live out God's calling and stay the course.